Restrictive Covenants: Do not be too restrictive... It may be costly. 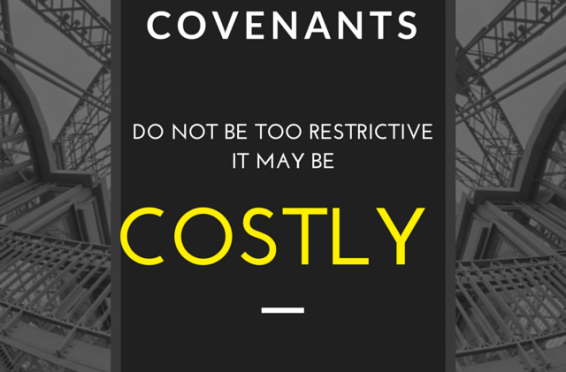 Restrictive Covenants: Do not be too restrictive… It may be costly. 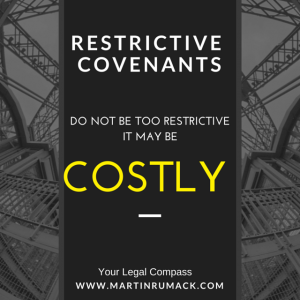 Employers invest significant time, resources, and money into training employees, whether they are professional or skilled tradespeople, white or blue collar employees, experienced or inexperienced, etc.  As Stelco used to advertise, “Our product is steel, our strength is people”.  The costs of training and developing employees – especially those in significant sales and administrative roles – can be very costly.  Over the years, employers have tried to safeguard that investment and protect the “bottom line”, by imposing various types of restrictions on employees that are conditions of their employment;  these measures aim to prevent employees from leaving their employer, protect the employer’s business from employees who do leave (i.e. by preventing them from stealing customers, suppliers, and other employees), and prevent former employees from using any confidential information, materials, systems, or products that they may have learned or obtained while employed.  These preventative initiatives – which are included in the employee’s contract with the employer – are generically called “non-competition” and “non-solicitation” clauses.

In a recent Ontario case, Martin Co. v. ConCreate USL Limited Partnership [2013] O.J. No. 515, Ontario’s High Court overturned a 2012 Ontario Superior Court decision, and found that the non-competition and non-solicitation clauses included in an employee’s employment agreement with a construction company called ConCreate were unenforceable.  The Court said that the clause prohibiting Derek Martin – a former 20-year employee and partner who subsequently started his own company – from competing with ConCreate for two years following the sale of his interest in the business was “unenforceable” because it was impossible to determine when such a sale could occur. Furthermore, ConCreate’s attempt to prevent Martin from communicating with its customers, dealers, agents or distributors regarding any of ConCreate’s existing or future products or services during that 24-month period was not reasonable since Martin would have no way of knowing all of the parties associated with the company or what products it planned to sell following his departure. The Judge stated “the party that seeks to enforce a restrictive covenant has the onus of demonstrating that the covenants are reasonable as between the parties”.

Today, an employer – through its lawyers – cannot take anything for granted when drafting the terms and conditions of an employment agreement and must think outside the box. While it may be acceptable to prohibit a former employee from soliciting the employer’s staff or customers for a reasonable period of time, it is unreasonable to totally prohibit that former employee from competing in that type of business at all, since it would effectively prevent him or her from earning a living. Also relevant are factors such as: the prior role of the employee; the business and the industry it covers; and the specific language of the clause.  The question is always:  “What is reasonably necessary to protect the former employer’s interest?”

In other words, the enforceability of the clause will always depend on the facts.  A broad non-solicitation clause might be hard to enforce against an entry-level salesperson who leaves a multi-million dollar company after having access to the same corporate data as hundreds of other salespeople in the organization.  On the other hand, a senior salesperson leaving a small company will likely be prevented from taking customers with him.  In all of these scenarios there must be more than just a potential loss of business; the company can always sue and recover damages for such losses.  Rather, the situation must be such that damages alone would not be enough and where there is a real risk that the former employee can inflict substantial or significant harm to the company’s entire business.

Additionally, employment agreements should also include a detailed termination clause that clearly sets out what employees will receive if they are terminated without cause. Employment contracts can be very useful for both parties in making clear exactly what their rights and obligations will be; however, prospective employees have to be cautious in reading and understanding an agreement before signing it. I recommend that before any employee signs an employment agreement containing restrictive covenants, he or she should first obtain legal advice from a lawyer, who will review the agreement and advise on the enforceability of its clauses.  The lawyer will also advise whether by signing the agreement the employee could be prevented from earning a livelihood in the event he or she is dismissed in the future without cause. The lawyer may also draft a counter-offer which changes the language so that it is slightly more beneficial to the employee. As a general rule, anyone not experienced with contractual language should not put themselves in the situation where they have to prove to a court that they did not understand what they signed and convince the court that the agreement should not be enforceable.

On the other hand, if a former employee is sued in order to enforce a restrictive clause, a viable defence could be made if the former employee can prove that he was never given an opportunity to obtain independent legal advice. To protect themselves, employers must insist on including a clause in the contract which an employee signs a statement of the effect: “I acknowledge and agree that I have had an opportunity to receive independent legal advice before signing this agreement.” I suggest that an employer obtain legal advice themselves to ensure that the covenant is not drafted too broadly and is one that a Court would be comfortable in enforcing against the former employee.

Today the trend is to have disputes relating to employment agreements settled by way of mediation or arbitration. When drafting an employment agreement, a provision stating that any issue including a breach of any clause shall be resolved by way of private mediation or arbitration as opposed to litigation should be inserted in the Agreement. A company may wish to maintain privacy with respect to any dispute involving the company’s financial information, proprietary information, etc. rather than it becoming public knowledge. At the end, if the parties are not satisfied with, or forgo an arbitration hearing, they can always litigate the issue in court.

In summary, the Court’s appear to be saying that if an employer is going to apply a non-solicit or non-disclosure or non-compete clause that restricts an employee’s ability to earn a living following termination, the onus is on the employer to ensure the clause is drafted in an enforceable manner, or that it is as minimally restrictive as necessary in order to achieve the objective of protecting its business.