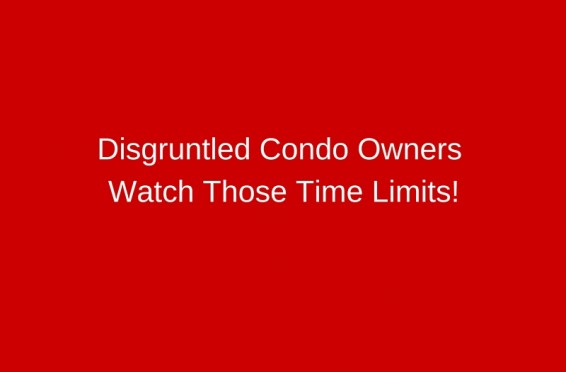 A recent Ontario case highlights the importance of timeliness:   Unhappy condo owners must assert their rights in a timely manner, otherwise they may find themselves out of time to sue for a court-ordered remedy.

The case involved Renaissance Plaza, a 26-story condominium in downtown Toronto.  The building contained residential units, and indoor parking garage with 120 spaces, as well as retail and commercial space.

Owners’ parking was dealt with in one of two ways:  Some condo owners had written agreements with the condominium corporation for their parking spaces, which renewed automatically; others had monthly arrangements with the corporate owner of on-site retail parking spots, which could be terminated on one month’s written notice.   When that second corporation terminated the arrangement with those owners having month-to-month arrangements, the residential condo corporation tried to help resolve the issue by essentially bringing a lawsuit on the affected owners’ behalf.   Unfortunately, it lost that court action, and incurred significant legal fees in the process.

What followed next triggered a second lawsuit, this time brought by certain owners against the condo corporation’s Board of Directors itself.

After incurring the hefty legal fees in the initial court action, the condo corporation decided to recoup those fees in a creative way:  It imposed a Special Assessment on each of the individual condominium owners, calculated at $7 per square foot.   In April 2011 the Board of Directors passed a resolution to that effect, and all the owners received written notice.

Perhaps not surprisingly, some of the owners objected to the Special Assessment, and circulated an open letter attacking the Board’s diligence and skill in handling the parking dispute and the subsequent litigation.  They wanted the Special Assessment suspended and a review committee appointed.  Notwithstanding these objections, at the May 2011 Annual General Meeting the other unit owners ratified the Board of Directors’ actions.

A group of owners then decided to sue the Board in Small Claims Court, claiming that the parking dispute was actually a private matter between one group of owners and the other corporation that leased them parking; they felt that the condo corporation’s money should not have been used to try to litigate the issue.  More to the point, they claimed that each condominium owner should not be saddled with personal obligations as a result of that litigation’s unfavourable outcome.

Unfortunately for those disgruntled owners, they delayed in bringing their claim until June 2013 – more than two years after the May 2011 Annual General Meeting that ratified the Special Assessment; in other words, they missed the two-year time limit imposed by the Ontario Limitations Act, 2002.  The matter was initially dismissed by a court on this basis, and owners appealed.

The appeal court agreed that the owners had missed the deadline.  Under the limitations legislation, which governs the time-limits within which any court actions must be brought, the disgruntled owners had two years to commence their action, with the time-limit commencing on the date on which they knew they had a potential claim and that they had possibly suffered damages.  As the court put it:

In this case, the alleged wrong was the Board’s use of the Corporation’s money to fund a private dispute, and the subsequent imposition of a Special Assessment. The [owners] knew that some loss or damage flowed from that wrong when the Board’s decision was ratified at the Annual General Meeting. From that point forward, only court proceedings could remedy the wrong.

The court also rejected the owners’ argument that the clock could not start ticking until the first instalment of the Special Assessment was actually due (in July 2011), and that this was the point at which the existence of “damages” was made clear to them.   To the contrary, the court found that the Special Assessment “went live” to both existing and new owners the moment it was imposed in May 2011, primarily because at that time the Board passed a by-law permitting it, and included it in a Status Certificate that was given to any potential new buyers.  (And note that under provincial condominium legislation, a Status Certificate also binds a corporation immediately).

In the end, the appeal court confirmed that the owners’ court action simply could not proceed because it was statute-barred.

One response on “Disgruntled Condo Owners – Watch Those Time Limits!”